Guild Homes has teamed up with Wem Town F.C. in a new sponsorship deal, which will see the local developer appear on the back of the club’s shirts, as well as their training kits for the current season. Guild Homes has recently launched a brand new collection of 36 one and two bedroom apartments in Wem, set in and around the historical building of the Mill and is getting into the community spirit by showing its support for the local football club. Jeff Guest, managing director of Guild Homes, said: “We have been warmly welcomed by the residents of Wem following the launch of our new apartments at the Mill, and we wanted to show our thanks by investing in something that is an important part of the community - Wem Town F.C. “Football is a sport that communities can really rally around and that’s the sort of atmosphere we want to create at Wem Mill, which is why this sponsorship is such a great match.” Shaun Astley, chairman of Wem Town F.C. comments: “We were happy to secure such a great sponsor in Guild Homes. The company has invested a lot into the community already, with the restoration of Wem Mill and its sponsorship of the football club shows that it is committed to the town. “Guild’s support has meant we have been able to supply the players with brand new training kit, which is a real boost for the club and sets us up nicely for the rest of the season. We would hope that this sponsorship will act as a catalyst for other local firms and townspeople to come forward and support the club in a similar way.” Guild Homes has restored Wem Mill to its former glory, which now features stunning apartments that have been sympathetically designed to combine the perfect blend of old and new. As well as the stunning conversion, Guild has also created two additional sets of new build apartment blocks providing a further 21 apartments to the MiIl’s 15. Prices for the apartments in Wem range from £89,950 to £139,950. However, if you are looking to rent a home rather than buy, then Guild can help you here too, as a proportion of the apartments have been set aside as rental properties. To make sure you don’t miss out on your chance to live in this amazing piece of history, visit the sales office, open late night on Fridays, 2pm to 7pm, and Saturday and Sunday, 11am to 5pm. Alternatively, call 0800 032 2823 or visit www.guildhomes.co.uk 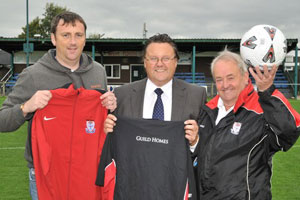