The highly anticipated launch of Wem Mill took place on Saturday (11th), with the Mayor of Wem, Councillor Mandy Meakin on hand to do the official honours and open the brand new Guild Homes development. House hunters from all areas flocked to the site to get a glimpse of the new apartments in Wem and were treated to a ribbon cutting ceremony by the Mayor to mark the launch, who also gave a speech about the history of the mill. The development offers a brand new collection of 36 one and two bedroom apartments, set in and around the historical building, which up until the 1980s was an active corn mill. Guild Homes has restored the relic to its former glory and it now features stunning apartments that have been sympathetically designed to combine the perfect blend of old and new. Jeff Guest, managing director of Guild Homes, said: “We were extremely honoured to have the Mayor join us and officially open the development. Wem Mill is such an important part of the town’s history, so it was important to have a fitting launch, which the Mayor helped to provide. “We are very proud of the homes we have created here and feel that our conversion has done the Mill justice. Our apartments in Wem offer a luxury property solution in the area and we have already had a lot of serious interest from house hunters, who we look forward to continually welcoming to Wem Mill.” As well as the stunning conversion, Guild has also created two additional sets of new build apartment blocks providing a further 21 apartments to the MiIl’s 15. Each apartment features either an open plan or a separate kitchen and living room, a family bathroom and one or two bedrooms. Completed in a neutral scheme, the new owners will be able to put their own stamp on it from the get go. Residents here will also benefit from a car parking space and various communal garden areas to while away the hours in. Prices at Wem Mill will range from £89,950 to £139,950. However, if you are looking to rent a home rather than buy, then Guild can help you here too, as a proportion of the apartments have been set aside as rental properties. The development is located in the delightful market town of Wem, to the north of Shrewsbury and is surrounded by miles of beautiful open countryside. Commuting to and from the development is easy, as there are a number of ‘A’ roads leading to nearby towns, including Shrewsbury, Telford and further afield. Plus, Wem train station is only a short stroll away from where you can be in Shrewsbury and Crewe in 12 and 23 minutes respectively*. To make sure you don’t miss out on your chance to live in one of these new apartments in Wem, visit the sales office, open late night on Fridays, 2pm to 7pm, and Saturday and Sunday, 11am to 5pm. Alternatively, call 0800 032 2823 or visit www.guildhomes.co.uk *thetrainline.com 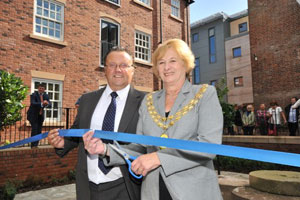