After a gruelling test of both physical and mental toughness, the Guild Homes team reached the highest point on the African continent, Mount Kilimanjaro. Standing at 5895 metres – higher than Everest base camp – the Uhuru peak felt like a dream for the team, after their punishing twelve-hour overnight climb that left them completely exhausted, but with an overwhelming sense of achievement.

In total, over £2000 was raised for charity, and team member Charlotte is now looking forward to her next adventure in Costa Rica where, with Raleigh International, she will use the money raised to build water and sanitation systems, schools and community centres for local people who are among the poorest in the world. 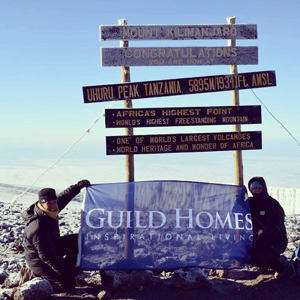