Stourbridge-based Guild Homes is pleased to announce that a Georgian building in Wem - which it has recently restored for residential use - has been recognised by The Georgian Group.

Overlooking the River Roden, Wem Milll was built in 1834 to mill corn from the surrounding countryside but it sadly fell into decay and dereliction. Using its experience as a developer, Guild Homes restored the building back to its former glory and added a modern extension to create 36 unique apartments.

Jeff Guest, managing director of Guild Homes, commented: “We are particularly proud of this restoration and new-build project where we were able to add an imaginative addition to this building’s historical past.

“Wem Mill is such a fantastic building, which we were desperate to save, as it is something of a local landmark. There was some tough competition in the category, so we are thrilled that Wem Mill was recognised by The Georgian Group.

“Our customers who choose to buy here will, no doubt, be proud to own a part of a building which is held in such high esteem by The Georgian Group and to be a part of Wem Mill’s past, present and future.”

Located just minutes away from the small market town of Wem, in Shropshire, these one- and two- bedroom apartments are finished to an exceptional standard, with contemporary, stylish fittings, private access – all surrounded by beautifully landscaped gardens.

Prices start from just £100,000, allowing purchasers to enjoy modern apartment living, along with the benefits of Shrewsbury, without the typical large price tag for this sought-after location.

For more information about these apartments available at Wem Mill, please contact Guild Homes on 0800 032 5488 or email to sales@guildhomes.co.uk 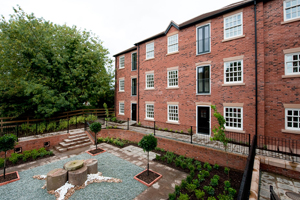